What can you do when your students finish early?! It's so easy!

Have students complete a puzzle! I came up with this idea when I was shopping for Christmas presents and saw this awesome puzzle in the store! I had no one to buy it for and then it suddenly hit me - I could challenge my 5th graders with this! 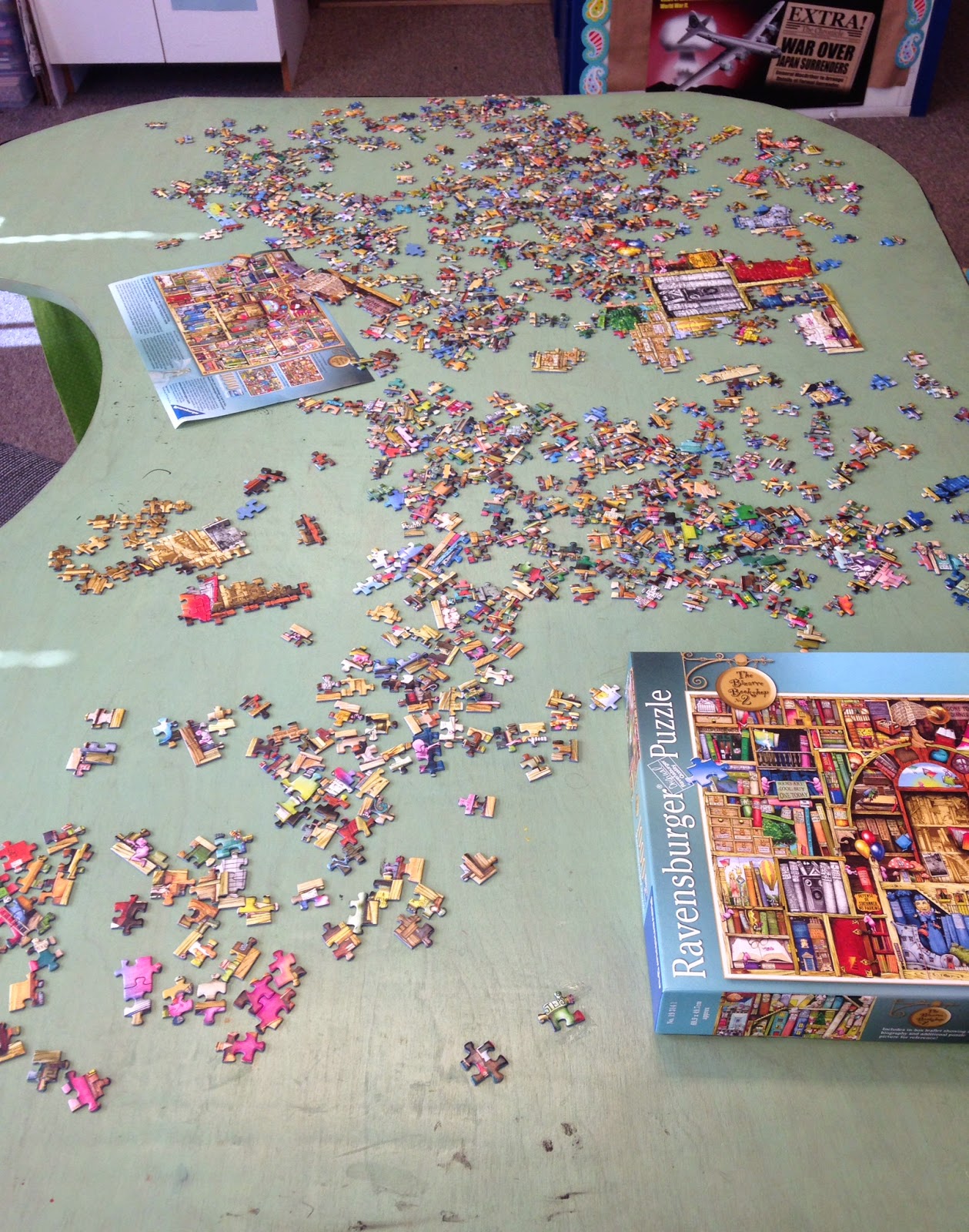 I introduced this to them last week with just a two rules:

1. Only 5 people are allowed to work on it at a time
2. You can work on it if you arrive early to school (way less on my tardy list now!) or if you finish your work early.

I started out by guiding them with suggestions of separating the edges and working on that first, but they sort of ignored me and did their own thing! I love it! There is so much wonderful learning happening with this! Also, if it can help get them here on time, I am all for it!

*It's 1,000 pieces and when it's completed, we will frame it and hang in our classroom library because it is a fantastic picture of a library with all kinds of cool characters from books.

This week the focus in our classroom was the Greensboro Four and the Sit-In Movement. I began the week long study with the picture book, Freedom on the Menu by Carol Boston Weatherford. We also read an interview a child took of his mother who sat-in at lunch counters in Kansas found in the book Oh, Freedom, by Casey King. This sparked a conversation about the segregation in the south and how everyday people were starting to stand up for what they believed in, it wasn't just groups such as the NAACP and SCLC. 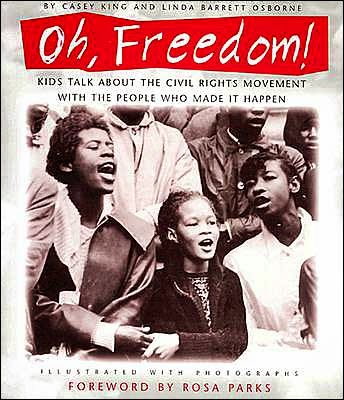 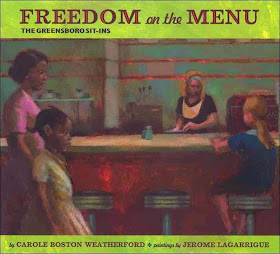 The next day, I read the book Sit-In: How Four Friends Stood up by Sitting Down, by Andrea Davis Pinkney. We briefly discussed this book and then I showed video clips from the documentary "February One". This is a great video that really paints a picture of what life was like in the south in the 50's and 60's. 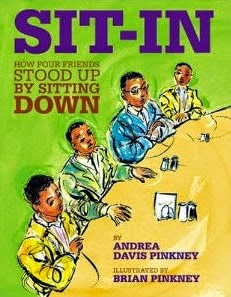 On Thursday, students analyzed a picture of 3 college students (two white and one black) sitting at a lunch counter. There is a crowd of white people surrounding them with one person dumping what looks like a soda on the head of one of the students sitting. You can tell by the picture that there was some other food already dumped on their heads prior to this picture being taken. Students wrote down what they observed in the picture and their interpretation of it.

To culminate the Greensboro Four study, students were given a paper doll (choices were black, white, male or female doll) and told to make the doll look as if they were going out to sit-in or picket. Students knew to "dress" the doll in nice clothing. They also came up with a story about who they are, where they came from and why they decided to rally together to fight for justice in Greensboro.

I think these are really great ideas to help bring this important event to life for students. By looking at real pictures, hearing the voices of the boys from February one and reading stories from everyday people who fought for their freedom or others, students were able to start to appreciate the magnitude of this time in our history. 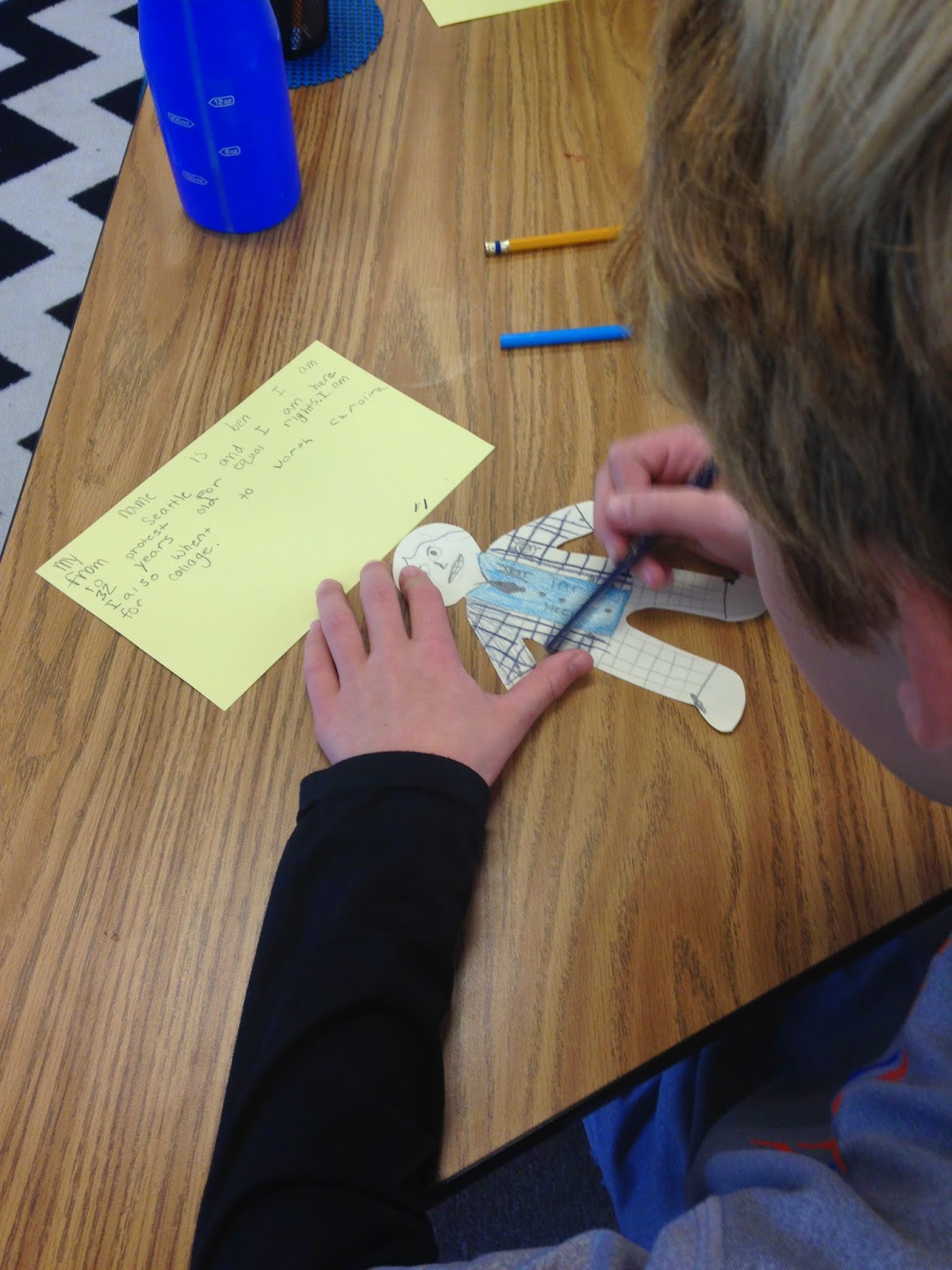 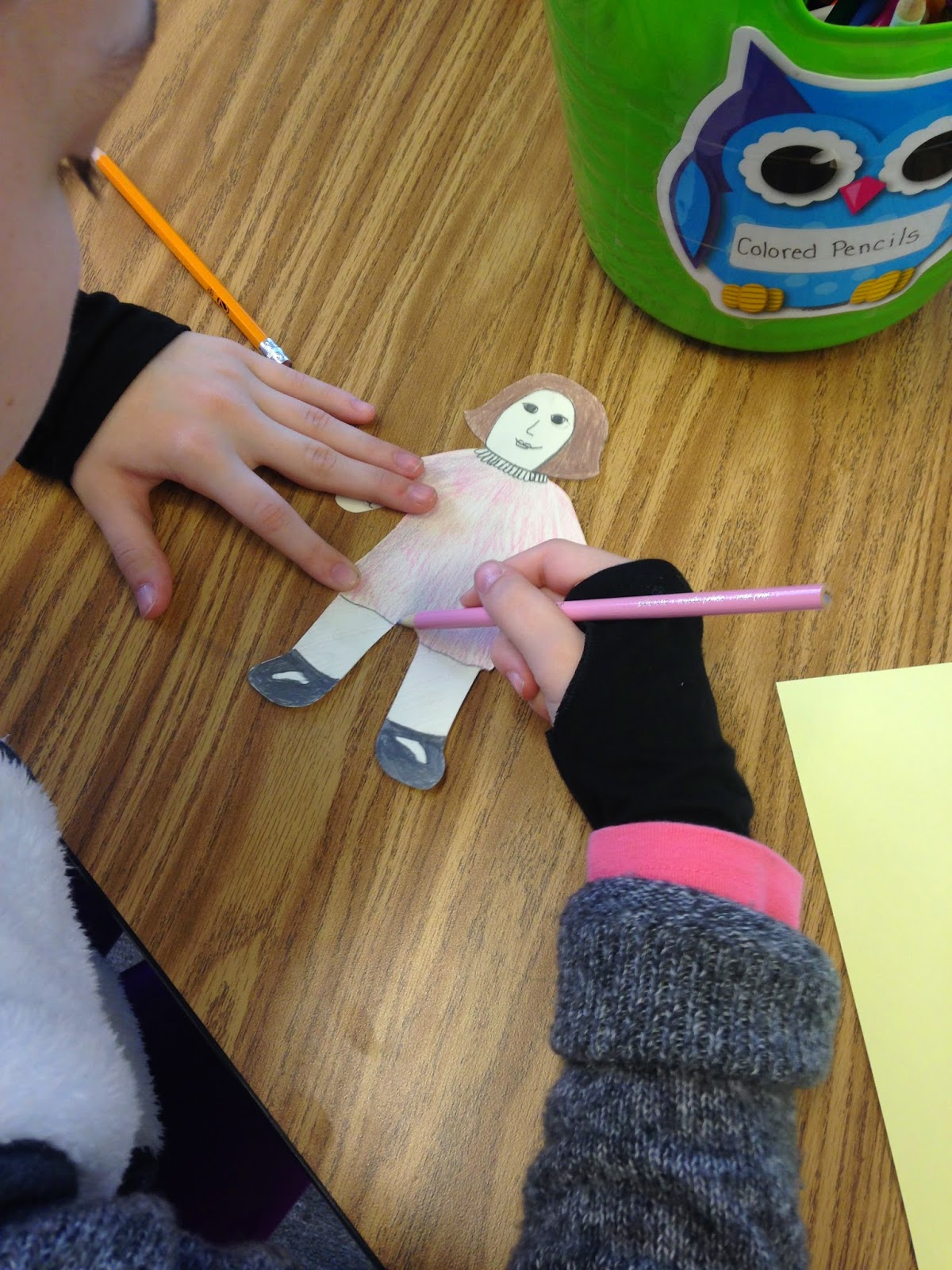 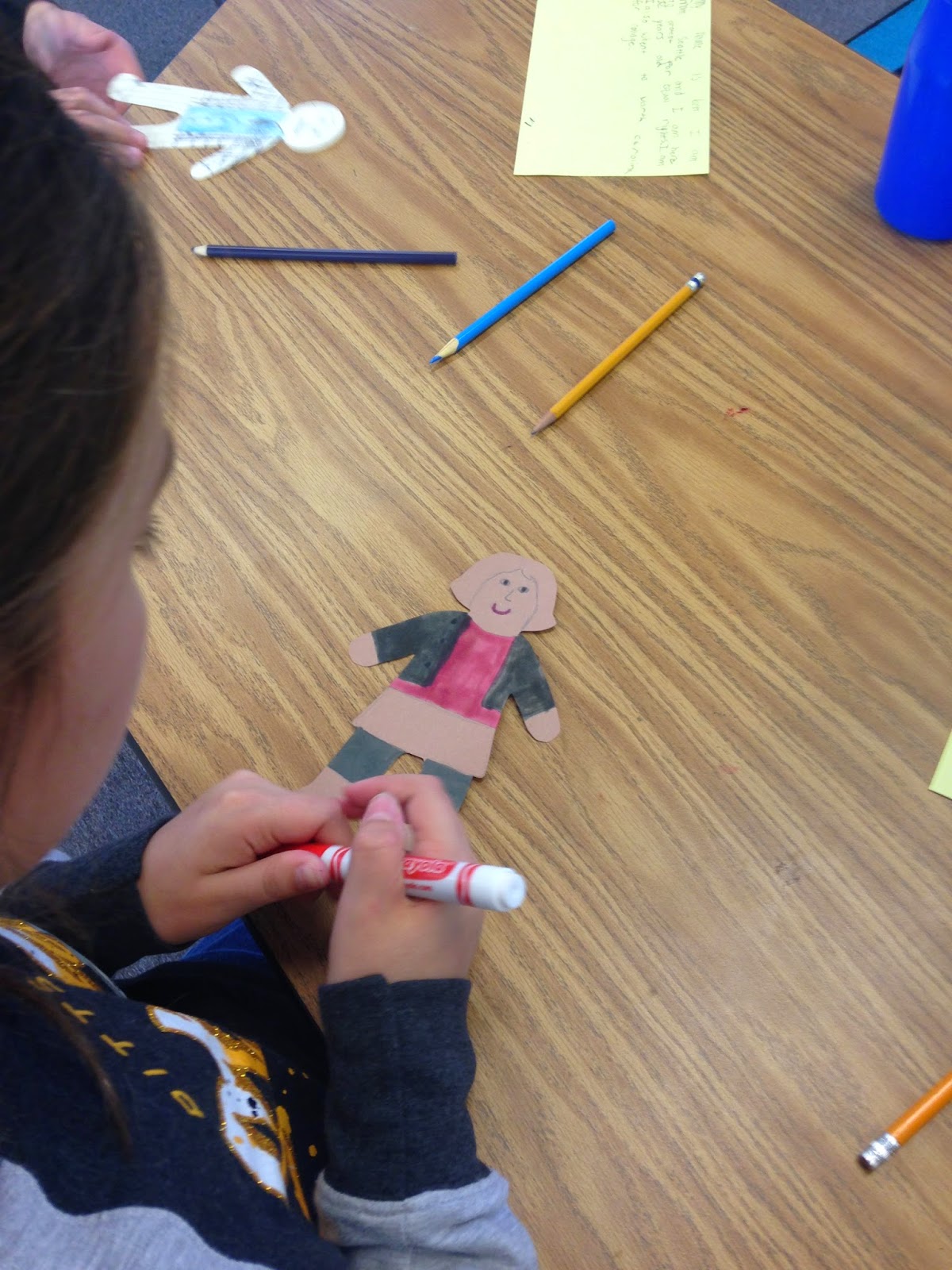 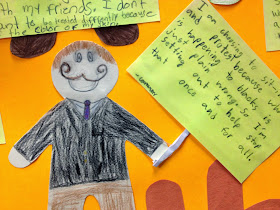 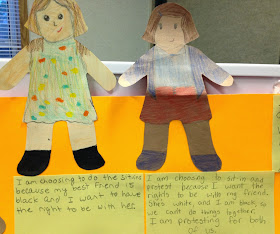 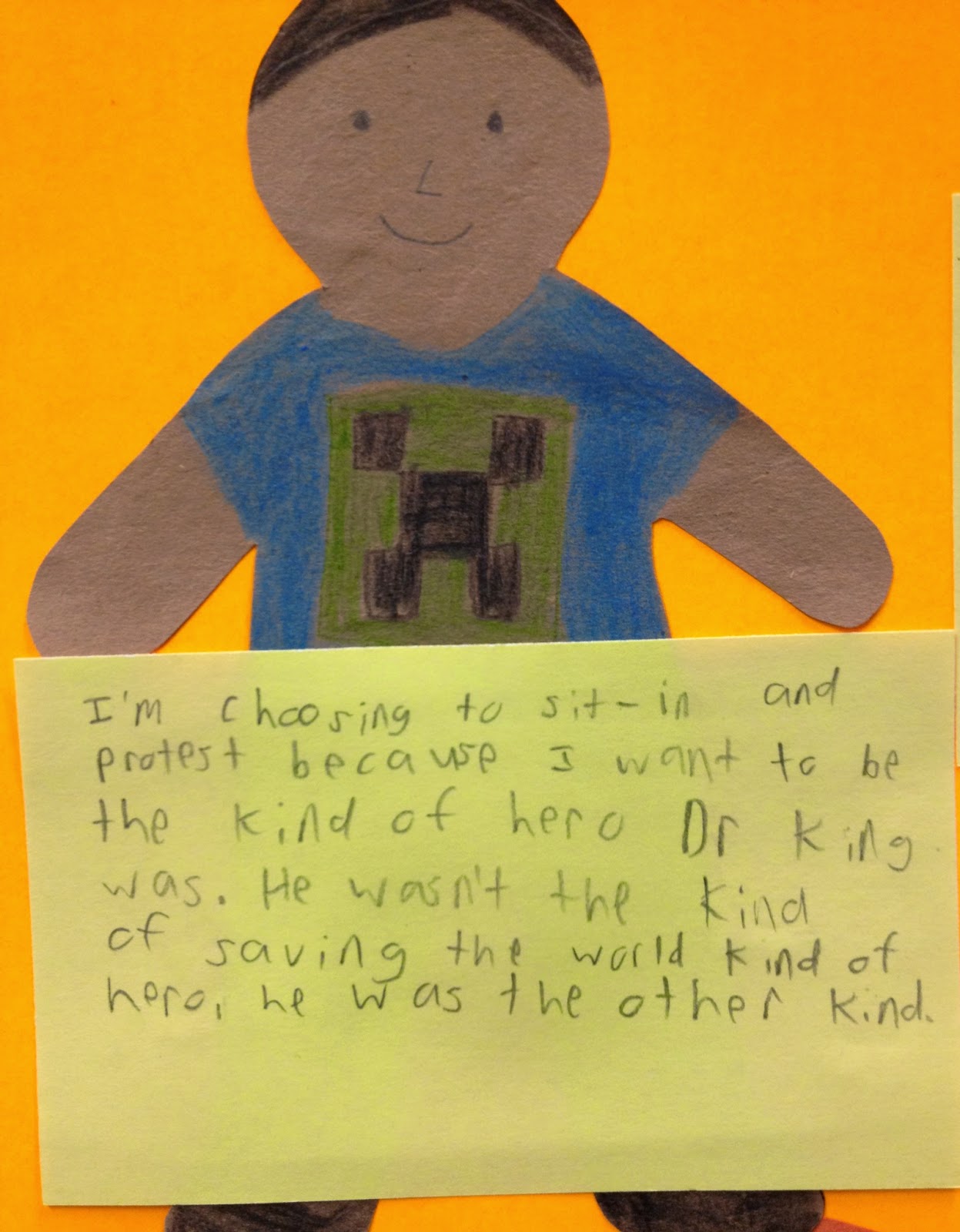 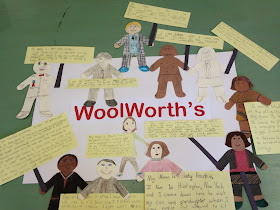 Every year in January, our school marches in the MLK parade in downtown Wilmington. To prepare, the students and I practice "Freedom Songs" that Americans who were fighting for equal rights sang to keep their hopes up and their hearts happy in times of segregation. Some of those songs include, "Meet Me at the Back of the Bus", "Sit at the Welcome Table", "Wade in the Water" and "We Shall Overcome". Every morning this month, my class and I choose 2-3 songs to sing to start our day. I began teaching my segregation unit this week and will continue until the end of January.

I started the unit off by "introducing" Dr. Martin Luther King, Jr. Not surprisingly, all of my students know of him, but very surprising to me was that none of them had heard him speak before! He was a man with such a powerful voice that I thought it extremely important to share his speeches with my class.

Yesterday, I used a really great Scholastic resource that dissects Dr. King's "I have a Dream Speech", by taking each part and describing what King meant and different historical events of that time in which he was referring to. This is the book below: 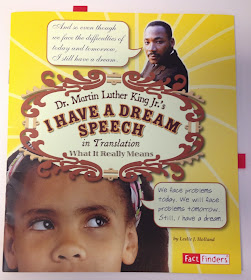 Afterwards, I shared a very brief video clip of people gathering at the Lincoln Memorial while singing "We Shall Overcome". I think this was a very touching moment for students because they got to see a song they have been singing in "real life". The video can be found by clicking here. Next, I showed them a short clip of the end of Dr. King's "I have a Dream" speech. This video can be found by clicking here. After we watched this part of his speech, I asked students what they think people who were watching him felt (blacks and whites, those who opposed segregation and those who were for it). I asked students what it might be like if Dr. King had never existed. Then, each wrote a letter to him. I presented it as, if Dr, King were still alive today and he could read your letter, what would you write?

I took the students' letters and chose one line from each to compose this classroom letter to Dr. King which will be presented at the presentation we do before the MLK parade. 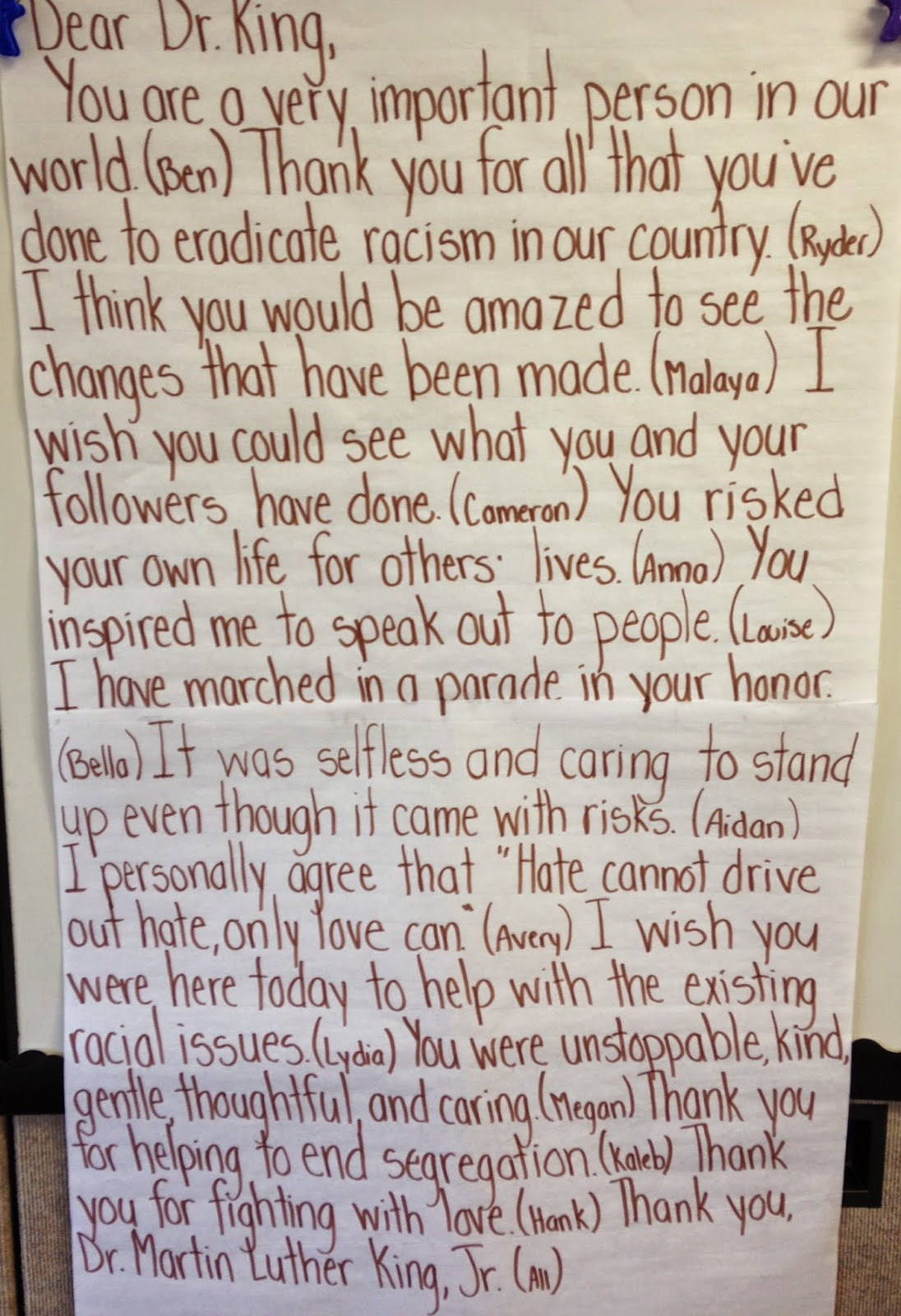